Festival of the two worlds

Posted in News and Events 0 Comments 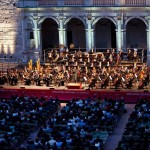 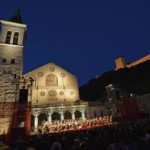 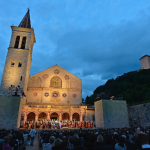 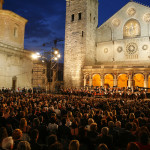 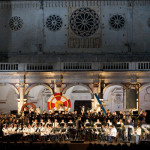 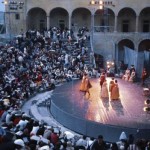 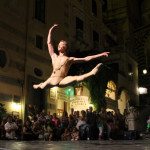 The Festival of Two Worlds, born in 1958 and also known as Spoleto Festival, is one of the most important and long-standing international events of music, art, culture and entertainment that takes place in Spoleto every year.
It lasts 17 days, from the last Friday of June to the third Sunday following, and falls in mid-July and concludes with the traditional Concert at Piazza del Duomo, where the world’s most prestigious philharmonic orchestras perform.

The founder of the Spoleto’s Two Worlds Festival is the composer Gian Carlo Menotti and from the mid-nineties and until 2007, artistic director was his son Francis Menotti. The current artistic director is the master Giorgio Ferrara.
Its purpose was to unite two very different cultures and art worlds, the European one and the American one, in the art of all its forms and expressions. And to set up a manifestation that was as international as possible.

Living and combining art in all its manifestations, therefore, classical and innovative, all in one place.

Spoleto was chosen as the venue for the festival for a number of reasons: the size of a historic center (man-made), the presence of the two theaters in Italy, the discovery of a Roman theater and above all the presence of Piazza Duomo, architecturally Silent and unchanged theater outside of time.

At the beginning of the decade 2000, internal frictions to financial and administrative management have matured.

On June 29, 2007, during the fiftieth edition of the Festival, in honor of the founder Gian Carlo Menotti, who disappeared a few months ago, his work “Maria Golovin” was performed on stage.

In autumn 2007, Francesco Rutelli, Minister of Cultural Heritage, in charge of finding the solution to the old frustration of the festival’s film management, gives Giorgio Ferrara the task of relaunching the event and appointing him as artistic director.
Under the guidance of Giorgio Ferrara, the Spoleto Festival grew strongly: from the 5000 presences in 2007, it has gone 80,000 last year with the 2016 edition. This has contributed to enhancing the attention of institutions, artists, operators , The companies, the media in relation to the event that has established itself as a world-famous event and an appointment not to be missed.

The Spoleto Festival has also inspired two similar events: the Spoleto USA Festival in Charleston, South Carolina (and twinned with Spoleto, ndr) founded in 1977 and directed for 17 years by Gian Carlo Menotti. In addition, the Melbourne International Arts Festival, an Australian event founded in 1986 and directed for 3 years by the master, where administration and billboards are, however, totally different and independent.
At the Festival of the 2 Worlds, the Teatro Nuovo, the Teatro Caio Melisso, the Teatro Romano, the Theater of the Six, the Monumental Complex of San Nicolò, the Albornoziana Rocca Courtyard, the Church of San Eufemia, the Auditorium of the Stella And Piazza del Duomo (also home to the concluding Concert), and some of the greatest artists of the 1900s such as Rudolf Nureev, Carla Fracci, Luciano Pavarotti and Ken Russell have passed.

The “duality” has always been present in the billboard: alongside exclusive, unusual and original avant-garde performances, works and works are respected in the classical tradition.
This year, the festival will see many new features, including “Bring an Adult to Theater” dedicated to children and teenagers up to 13 years of age and to all high school students living in Spoleto. With this promotion, the kids will be able to “invite” an adult to the theater and the cost of the 2 tickets will be only € 11.00.

In addition, for children between the ages of 14 and 30, 50% reductions are expected for all shows (except for events hosted, with limited availability).

The Festival will make available about 5000 tickets at a special price of € 1, reserved for workers with difficulties in the preparation of social dampers (2 tickets per person for up to 6 shows) and to non-profit organizations and organizations for the purpose of social solidarity of persons Disadvantaged (up to 6 tickets to show).

The Festival reserves every year an eye for young people with “Il Festival Siamo Noi”, a project aimed at all pupils of primary and secondary schools in the city with theater education, work-language alternation and promotions on shows dedicated to boys.